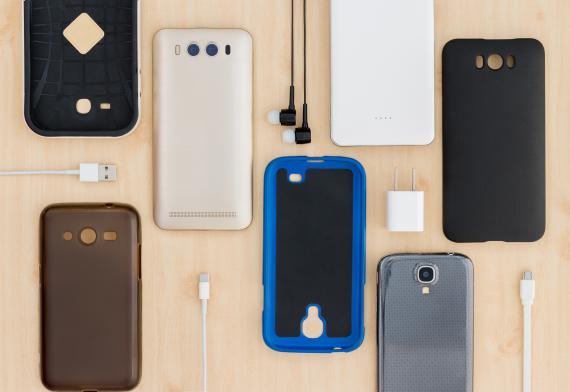 We think we know everything about smartphones; what they are made of, what processor they have, the capacity of their memory, the camera quality, and even when the first Android smartphone was developed… But there are many things that we do not know and that remain unnoticed. In this article, we will go through some of the fun facts about smartphones…

Smartphones and tablets are real breeding grounds for bacteria. Yes, you read the subtext well, and additionally, one in six smartphones is contaminated with fecal matter. Disgusting, isn’t it? Studies have revealed that there are about 160 million bacteria per square inch of any given smartphone.
Now you will want to clean your smartphones more often. While it’s not advised to wash your gadgets with soap or water, you can use a dry lint-free cloth to wipe them clean, or you may carry portable hand sanitizers – use them regularly.

2. More People in the World Own a Smartphone Than a Toilet

3. There Is Already a Phobia Related to Smartphone Use

It is called nomophobia. It is an abbreviation of the English expression no mobile phobia. If you have nomophobia, you panic as soon as you step out of the house without your smartphone. More and more people are doing digital detoxes, which are therapies that help people get rid of their smartphones and their smartphone addiction in recent years. The first step: turn off your smartphone for 24 hours. Would you be able to do that?

Forty-eight years back, Martin Cooper, an engineer at Motorola, called his competitor Joel Engel while walking down Fifth Avenue, and this marked the first call with a cell phone ever.
The phone weighed 1 kilogram and was 23 centimeters long. The clunky “shoe” phone, which got its name because it was as big as a shoebox, allowed a user to talk for 35 minutes and required 10 hours to recharge, and on top of that, it cost approximately 4000 dollars, so you had to be rich to be a phone owner. Seeing the prices of some phones these days across the world – not much has changed in this regard.

5. Nokia Begin with the Production of Paper and Cardboard

The Finnish company Nokia is known worldwide; the company was founded in 1865 and was responsible for the production of paper pulp. Later in 1912, Nokia, Finnish Cable Works, and Finnish Rubber Works decided to come together as one company to form the Nokia Group. The group was very diverse, and it was only in 1987, 22 years after its foundation, that Nokia developed its first mobile phone – the “Mobira Cityman 900”.

An astonishing 55,000,000 individuals use two phones at any given time. In most situations, one is a business phone with a platform that isn’t up to par, necessitating another purchase. Ninety percent of those who possess two cellphones use them both simultaneously, indicating that having multiple screens allows for more multitasking.

The smartphone industry is constantly growing, and these devices are getting smarter and smarter. It’s quite curious that something that small means a world to us – in a weird way, it reflects our lives. Let us know in the comments what do you think the future of smartphones will be?