Skip to Content
Home Consoles Is Google Stadia Worth It Nowadays?

Google Stadia has had a bit of a rough go. The service was billed as a way to easily get console-quality gaming without having to actually invest in a console. But complicated setups and buggy performance made it a tough sell. Since then, Google has been working hard at improving the overall Stadia experience, making deals like one with AT&T to get Stadia in more hands, and more.

So, that begs the question. At this point, a year and a half after its launch, is Google Stadia an ecosystem that’s actually worth buying into? Let’s find out.

Setting up the service is perhaps the worst part of using it. You’ll start by downloading and installing the Stadia app on your phone. Then, you’ll turn on the controller, pair the controller with the app, press a combination of buttons to approve pairing, and you should be off to the races.

Of course, it’s also important to note that you’ll need a solid connection to use Stadia. Your connection will need to be better than you might assume. Even with a good network, you should expect the odd stutter every now and then.

The Google Stadia app is relatively easy to navigate. It’s divided into three tabs, with one “Store” tab, one “Home” tab, and one “Explore” tab. From the Store tab, you’ll be able to see games that you can claim as part of Stadia Pro, if you have a subscription, along with any games that you can buy to play on the service. Then, when you’re ready to play, you can head to the Home tab to start a game up. The Explore tab is where you’ll find resources for things like tutorials, news, and so on. You probably won’t find yourself in the Explore tab much.

There’s one feature missing in the Stadia app. A search tool. Yeah, seriously. It’s completely absurd that there’s no search tool in the Stadia app this long after the service’s release. It also makes it difficult to find the games that you want to play. If you have a specific game in mind, you’ll have to find the list of all the games in the app, and scroll through them. You should really be able to search based on title, genre, price, and so on. Thankfully, you can search in Chrome. 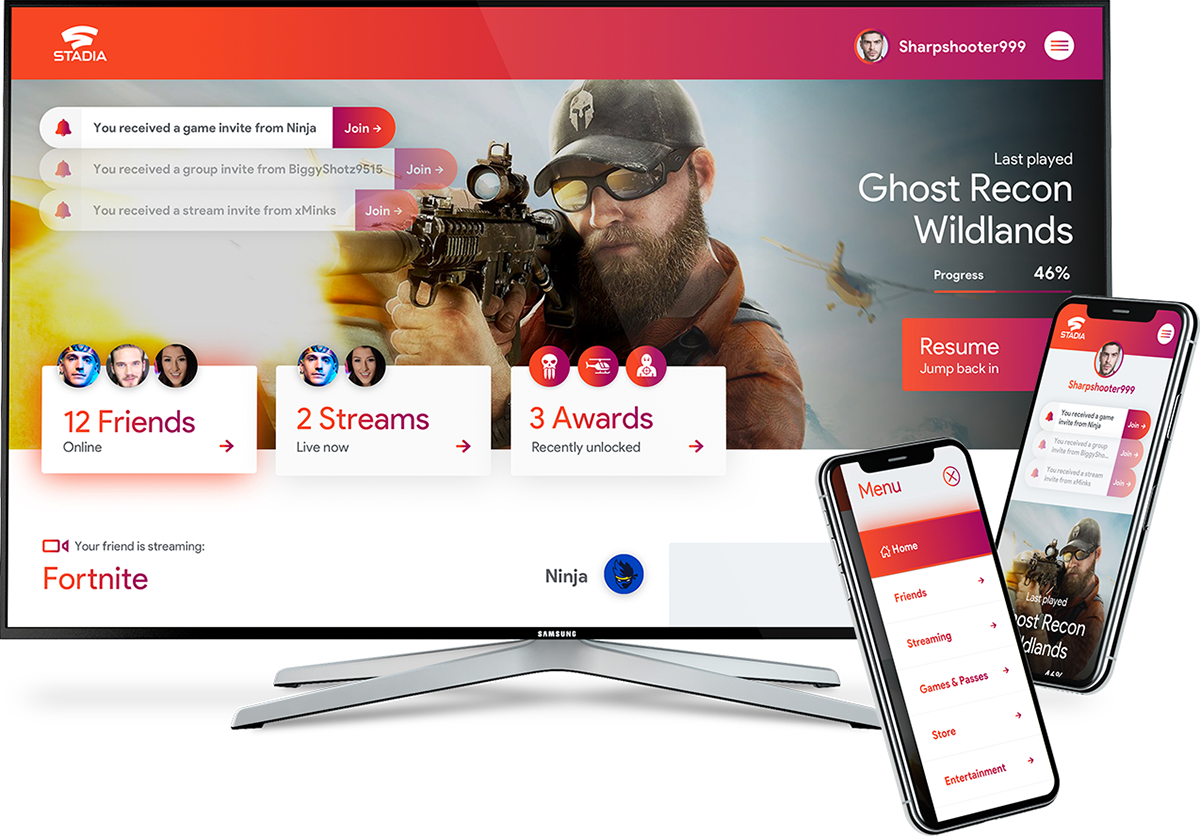 Stadia’s library, at this point, isn’t bad — and it’s growing too. There are plenty of heavy hitters, like Assassin’s Creed: Valhalla, CyberPunk 2077, and Hitman 3, plus plenty of smaller games to check out. The service also offers an add-on for Ubisoft+, which costs $15 per month and gives you access to Ubisoft’s relatively large library of games.

It’s important to temper expectations around Stadia Pro. If you’re expecting to get access to all or most of the games on Stadia, you’ll be disappointed. But the games that are available on Stadia Pro, like the Hitman: Complete First Season collection, make it worth checking out. Stadia Pro also unlocks 4K streaming for those that have a fast enough connection. And, it gives users pretty heavy discounts on some of the games in Stadia.

You won’t necessarily have to pay to access Stadia Pro, if you just want to try it out. Stadia Pro is available itself for a one-month subscription, while AT&T is offering six months of Stadia Pro to subscribers of its unlimited plans. If you’re thinking of subscribing to a new plan anyway, it may be worth it. Otherwise, the one-month trial should still be enough to see if paying for the service is worth it for you. 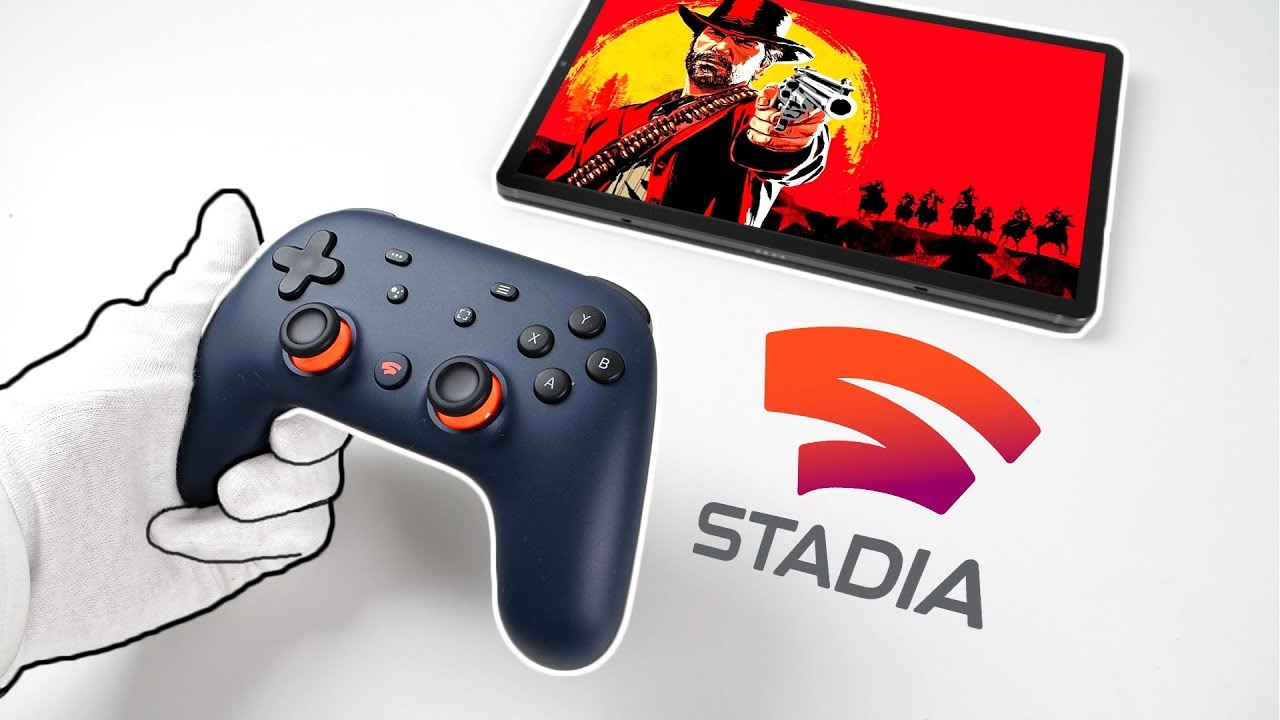 The Google Stadia controller is quite nice. It’s got an ergonomic feel to it, and while it does feel a little last-gen in a world with Sony’s new DualSense controller, it definitely gets the job done.

The controller is laid-out more like a PlayStation controller than an Xbox controller, but ultimately there are elements from all major controllers here. The joysticks are placed in-line like a DualShock 4 controller, while the controller offers XYAB buttons like on the Xbox.

In the middle, there’s a Stadia button to turn the controller on and off, and as you would expect from a Google product, there’s an Assistant button on the left, paired with an Options button. On the right, there’s a Menu button and a Share button. On the bottom, there’s a headphone jack, with a USB-C port on the back for charging.

The controller works a little differently than others. The controller actually connects directly to Stadia through Wi-Fi, rather than connecting to your device through Bluetooth, which would introduce more latency. You can also use the controller through a USB-C connection to your phone.

That said, the controller is a little pricey. If you plan on using your phone or computer, you don’t need it. If you want to use Stadia with a Chromecast Ultra, however, the Stadia controller is required.

In 2021, Google Stadia has passed many of its growing pains. These days, it’s not bad, at all. Stadia Pro is definitely worth at least checking out, even if you don’t care much for the games available as part of it. But whether you use Stadia Pro or not, if you have a stable and fast internet connection, in 2021, Stadia works pretty well.