Let’s Talk about Transistors (Part One) 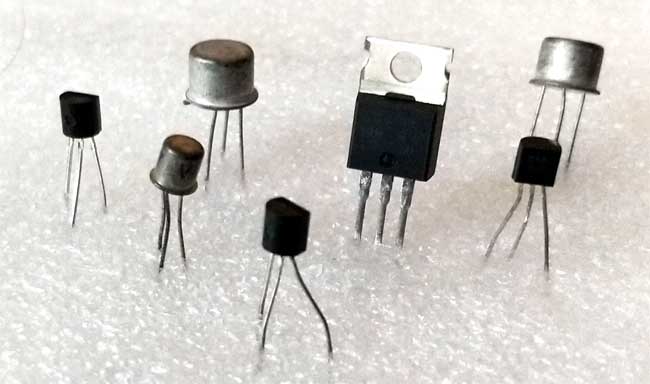 Let’s Talk about Transistors (Part One)

Although some active components such as diodes are capable of allowing current to flow in one direction only, with these we cannot perform an essential task in any electronic circuit of moderate complexity: the control of a signal with another sign. It seems important to have a component that allows to control the conditions of current (i)-voltage (v) by the electrical signal that passes through it, and that is able to modify these conditions according to a second signal (control signal).

A Bit of History

At the beginning of the 20th century, “triodes” appeared, 3-terminal devices consisting of a vacuum valve to which a control electrode (called a grid) was added to modify the flow of electrons from the cathode to the anode. The invention of the triode was the consequence of many almost simultaneous works, being the first patent filed by Lee De Forest for a very similar device (it had 3 terminals, but it did not work in vacuum) that he called “Audion”.

The main problem with triodes was their large size and power consumption. As the knowledge of solid state physics progressed, research began on the possibility of using this new knowledge to develop a device that would perform the function of these valves. And it was from the experiments of John Bardeen and Walter Brattain, conducted in 1947 at Bell Laboratories in the United States, with work group leader William Shockley, that the three co-invented the modern bipolar transistor, for which they received the Nobel Prize in Physics in 1956.

A bipolar transistor consists of three doped semiconductor regions. As is well known, semiconductor components are insulators in their pure state, but they can be converted to conductors by adding small amounts of doping elements. A BJT consists of two regions of the same type (N or P) separated by a region of opposite type. Each of these is connected to one of the three terminals of the device, called emitter, base and collector. Depending on whether the separating region is P-type or N-type, it is referred to as an NPN-type or PNP-type bipolar transistor.

The picture above shows a conceptual representation of the structure of a junction transistor, NPN type. As can be seen, the low-doped, high-resistivity base (P-type) separates the N-type semiconductor regions. The base-collector junction is much larger than the emitter-base junction. For this reason, since the emitter doping is higher than the collector doping, BJTs are asymmetric, i.e., the emitter and collector terminals are not interchangeable, which could also lead to different behavior in our circuits.

Although there is a lot of relevant information about bipolar transistors, in short, the fundamentals about them have been mentioned. Do you still want to learn more about them? Come back to check out the second part of our article. Until then, what do you think of transistors? Let us know your thoughts in the comments below.